Vanilla Crown on the Rocks //Private with Vanillatuft

Vanilla Crown on the Rocks //Private with Vanillatuft

He had spent the morning collecting herbs, hunting and chasing off strays that came too close to Bloodclan's border. Ice blue eyes watched as the sun went down behind the Ferris wheel of their abandon carnival. The days seemed to drag on forever with the gloomy skies and rumbling thunder with occasional drizzle. White paws carried Jaegar's muscular body over the mud covered concrete as he walked head down out of camp. A lot had been on his mind. Winter was only a wink away if everyone took a moment to think about it.

Ears perked at the sound of twigs snapping from the forest around him. He had so been lost in thought that he just allowed his paws to take him wherever. Front claws unsheathed as he tried to find the source of the sound, but caught sight of a snowy and blue eyed beauty. She was breathtaking...

Focus Jaegar, you are Bloodclan. No other woman but that of your own kind would even dare to dream of you.

"Ello madam. Can I assist you?" Silence. Hmph, that was odd? Eyes searched but she clearly didn't seem to hear him. Who was she? And  was she headed to the Moonstone too?
.:vanillatuft:.

― yes, vanillatuft had been headed to the moonstone.

which she wasn't supposed to do.

the molly was walking along, tail in the air and ears perked high. she surely would get attacked by an upcoming patrol, just strolling past everyone's borders like this. but, she didn't care. she thought starclan would protect her and she would be safe; so she just continued marching right along, not giving a single damn if anyone approached or her got upset with her for being on their territory.

she felt some vibrations, some paw steps approaching. she swiveled her head, coming to a stop. well, she miswell at least try to not get killed, right? she turned her head a few times, trying to figure out which direction the vibrations were coming from - all the while, jaegar had already called out to her - before she smelled the scent. and thats how she found the tom. the tom was handsome, to say at the least! a soft smile crossed her face whenever she saw him. yes, she was a medicine cat but she could still dream!

and then she realized what the scent actually was. bloodclan. her stomach curled and the smile wanted to disappear, but she kept it on because she didn't want to come off as unfriendly. she knew what bloodclanners were like, what they could do to someone like her. she flicked her tail as a greeting, then remembered; if she didn't know this tom, he didn't know her. he didn't know her signals.

"um - hello," she tried with a little embarrassment, her sapphire eyes glancing around with a bit of unease as the tom approached. "passing. moonstone - medicine cat. i am vanillatuft. um, deaf."

that was a lot, and honestly she hoped it came out okay and he understood what she was trying to get at. as he got closer though, despite his bloodclan scent, she smelled something else - was that herbs? was he bloodclan's medic?

"Apologies." He signs and meows. "Moonstone too. Can I join you?"

It had been a while since he had met a deaf cat and it was rather odd to see one alone. She smelled of the moor and heather, and that's when it clicked. She was Windclan's medic. Ice blue eyes looked the molly over before walking with her.

"New? Or experienced?" He asked trying to strike up some small talk in order to get to know her they best way her could.
.:vanillatuft:.

― well, that wasn't too hard. she expected to be given a rougher time, maybe get made fun of or something, but he just asked to join. and he seemed to know some minimal sign language too, which was neat; meaning he used to know someone before he that was deaf. this wasn't such a bad situation she had put herself in after all. she flicked an ear and nodded in response to his question if he could come. perhaps it was a good idea that he wanted to come; he could look out for her since she had been dumb and left without anyone.

and then he continued to ask if she was new or experiences. she flicked an ear again, wondering how to respond. she had been a medicine cat for a while now, so she knew everything. maybe he thought she was an apprentice because she was so short, so little to be an actual full grown cat. but she couldn't help that she was half munchkin! the poor molly waddled as she walked, almost half the side of everyone she met. "for sixteen moons," she said after thinking for a bit. a little over a year she had been a medicine cat. she started as soon as she was the age of an apprentice, though.

"and you?" she asked back. since he wanted to go to moonstone with her, it probably meant that he was heading there for his own medicine cat duties. unless he was a leader of sorts - but just by looking at him, she guessed that wasn't the case. and he smelt strongly of different herbs.

Jaegar fell into step with the Windclan molly as she came beside him, and he smiled softly. For sixteen moons? To him it seemed like nothing because he was fairly older than the young beauty. But exactly how long.... that was a tough question for the muscular brown tom to answer.

"Bloodclan for 27 moons. I think?" Which was about right. To be truthful, he knew much earlier on from a young age the herbs that could cure and kill from a friend of his mother. The former clan cat had left for a kittypet life after becoming pregnant, and joined his mother's house folk shortly after he was born. Jaegar had grew fond of the art of herbs which led him to switch his path to Medic it when he joined Bloodclan.

"Name is Jaegar. Forgot to say, sorry. Why alone?" Ice blue eyes blink apologetically since he forgot to introduce himself.
kiwi 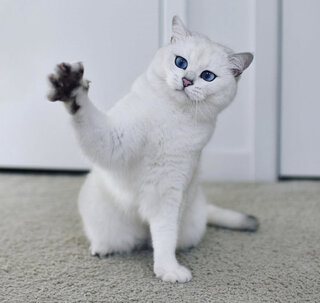 ― vanillatuft had already guessed that this tom was from bloodclan and realized he was their medic, but she wasn't entirely opened up to him yet. she still knew not to trust bloodclan, no matter how nice this tom seemed; what if he randomly snapped, turned on her, brought her to camp as a hostage? oh, batstar would just kill her! her mind was running through all the possibly things that this tom could do to make her life miserable like make her treat all their stinky elders.

vanillatuft continued to watch his mouth as he said his name. truth be told, she had no clue what he had just said. she had never seen that word, ever. that was a bunch of weird letters put together, she had never seen that mouth formation. she had literally no clue what his name was. thats fine, she was pretty good at calling cats by random names. they usually never had the guts to tell her their real name, unfortunately.

"um..." didn't she already tell him she was going to moonstone? is that what he meant? or did he want to know why she didn't travel with anyone? she flicked an ear, the younger molly searching her brain for an answer. "moonstone," she repeated finally. "didn't want to wait." there were a few patrols out and she didn't want to wait for her friends to get back; plus, the cats that were still in camp she didn't particularly trust or want to make a journey with them. "why are you going moonstone?"

She was quiet for a moment before reminding him she was going to moonstone, before mentioning she didn't want to wait for help. Which he could understand because he was use to leaving others behind who couldn't keep up. Nodding Jaegar had to think about his reason. And to be honest, there wasn't really a good one other than just getting out of camp, but he did need to find an apprentice after all.
"Find answers on apprentice." He signed to her before stopping at the sound of a branch moving. The tom paused for a moment before hearing what sounded like voices.
"DOWN!"
He urged and moved with Vanillatuft inside a fallen tree. Jaegar watched as the forest moved and twolegs appeared. Twolegs?! They carried these things on their back, lights in their hands and by their actions he could tell they were lost. Now how were they suppose to get to the Moonstone without being seen?
He stopped for a moment to think of what to do. Ice blue eyes looked at the snowy molly for answers. "You okay? Idea how to escape?" The chocolate tom sunk into the ground more as the light grazed over the log they were hiding behind. As many times as he had encountered them, been handled by them to save himself or others... this was not to the time to do so because he feared they would come after them. Nor did he want to leave Vanillatuft behind.
kiwi

― "no apprentice either," she told him honestly. it seemed to her like a lot of the medicine cats were having trouble finding apprentices; nobody seemed to want to step out. she couldnt blame them - she never really wanted to be a medicine cat either - but the position was just so dire, so neccesary, it scared her to know if anything happened to her nobody would be left to take her spot. windclan could be doomed.

vanillatuft honestly wouldn't have noticed the twolegs if it wasn't for jaegar pushing her towards a fallen tree. her first reaction was a short hiss, her fur raising as he whipped to look at the tom, wondering what he was doing - she kept in mind he was bloodclan, and she still didn't trust him - but then she realized he was pointing at something which was a lot of twolegs. oh. maybe she could trust him after all, then. he had just helped her out big time. this is a very specific reason why she should travel with others, because she would've been doomed until the twolegs got close enough that she would feel their vibrations of their feet - and by that point it would've been too late for her to move away.

she watched, seeing that they didn't seem to know what was going on. she crouched low, knowing her bright white coat was a dead giveaway to their position if the twolegs saw them. she thought of a few options, but then finally looked over at jaegar just as he asked what ideas she had. "faster than them," she told him. honestly, if they just took off, they would be safe. it would be tiring, yes, but the twolegs would eventually stop chasing them - or they wouldn't chase at all. "or sneak behind."