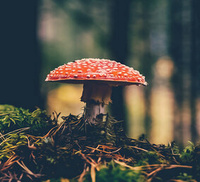 ― it had been forever since he had smelled this scent. but he still knew what it was; it was a clan scent. his parents had warned him and his sister of the clans before they just up and left them to fend for themselves. so mushroom and his sister did their best to stray as far from the clans as they could; and they got a decent ways away, but his sister didn't last too long. he stayed on his own for a bit, the kid earning scars and a chipped ear along the way, but now he was back here, at the clans. he wasn't sure which clan he was in, but he was standing in one of their territory's. the scent was strong. they would surely notice his scent, standing out soon and come find him.

he just stood, sniffing. he was tired, and he was sick. he was always sick; he always had a cough or a sniffle of some kind. there was a word for it; but he forgot it. weakened immune system, perhaps. he flicked an ear.

he didn't know why his parents had abandoned him, why they had sent them on their way. why would you have kids if you didn't want to be around them? his parents knew they were sending their kids to their deaths by sending them away, but they still did anyways. he could still remember watching his sister get weaker and weaker, until one day, she didn't wake. he stayed by her body as long as he could, but eventually the stench forced him to leave as she decayed.

he was kind of excited to see what this clan had to offer. something, anything, had to be better than just running for his life out here, eating roadkill and bugs and butterflies. he looked like everything he had been living by; his long hickory fur was ragged and not very well kept, he didn't smell very great, and he was pretty torn up. he was scrawny; despite his long fur, you could still see he was skin and bone. he wondered what he would say when these cats came up to him. maybe he should just keep walking.

and he did. he began to pick up a small trot, the tom following the scent, going towards where it seemed to get heavier and heavier. but he stopped dead when he heard rustling, and he knew it wasn't a mouse. his ears perked, and his chest grew with excitement. "whose there?" 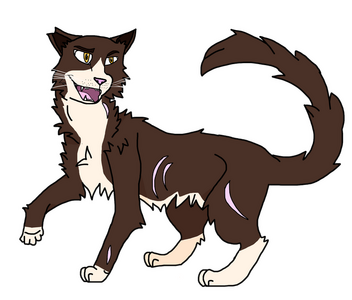 COALWHISKER
thunderclan warrior | solid black | oriental short-hair | tags
Coalwhisker was of the belief that it was the little things that made life. None of that grand destinies or happy endings, it was the moments in between. The flittering joy of a successful hunt, the satisfaction in finding a private place to nap. It was in one such place that Coalwhisker startles awake, partially wedged beneath a blackthorn bush.

A stranger is approaching. Coalwhisker's ears are perked, and he lays rigid, alert. A stranger is approaching, yes, but who? From where? The scent does not carry any clan he recognizes. A threat? Undoubtedly. It would be his luck that it would be a threat. To fight then, or to retreat? The answer is obvious. Coalwhisker hasn't any business actually defending ThunderClan. No, better to go and tell someone else, let them deal with it.

Slowly, he extracts himself from the bush as to not disturb it, letting out a string of curses under his breath when he does just that. The voice that calls out gives him pause. It isn't a particularly threatening voice. Cautious, Coalwhisker pushes himself through the underbrush until his eyes fall upon the source of the voice. StarClan. A kit. The only thing worse than a threatening stranger.

"Who are you?" Coalwhisker counters, keeping his distance. The thing could bite yet.  "Walking around like- what? You're lost?" Admittedly, Coalwhisker had come to ThunderClan when he was in need of a home, and they had taken him in. He had been older than this one here, but perhaps that was a sign that they needed the help more than he had, "Or you need a place to stay?"
_________________
character storage
mushroom.

― oh boy! it was a clan cat. mushroom felt his pelt spiking with excitement, bubbles floating in his belly. this cat was massive! well, at least bigger than he was. his tail sway behind him, nearly trembling with exhilaration. the thin kit tried to stand tall, to make himself look stronger. but it was clear there was nothing strong about him; he was small, malnourished, and smelled. he didn't even notice the disgust or disdain in this warrior's voice, he was too excited and too set on making himself look good.

"my name's mushroom," he greeted the tom, clearly forcing his voice deeper so he looked bigger, more intimidating, would be taken seriously. "i'm - no, i'm not lost. i'm.." he didn't really know what to say. what was he here for? what was he doing here? he didn't know. yes, a place to stay, perhaps. "i'm looking to join your, ah- your group. i think you may need me." was that good?

COALWHISKER
thunderclan warrior | solid black | oriental short-hair | tags
"Mushroom," He repeats dryly, and thinks of insistent things growing in every crevice that would house them.  "We need you?" Coalwhisker continues in the sort of tone that makes it abundantly clear that he is humoring Mushroom. "Name's Coalwhisker, anyway. You don't bite, do you? Or have fleas?" Both apply to Coalwhisker, but Mushroom doesn't need those details, "I guess you can come along with me. I can show you to camp, tell everyone in ThunderClan that a kit skinnier than a WindClanner is here to save us."

Coalwhisker was also skinnier than a WindClanner. Something else he decides to not mention. He turns, and with a curl of his long tail, invites Mushroom to follow, "We can have a nice, quiet trip, alright? And don't stand too close, you might still have, what? Worms?" This kit was sure to have something, Coalwhisker was sure.
_________________
character storage
mushroom.

― unfortunately, his tone of voice that was making fun of mushroom went completely over his head and he didn't even realize the tom was humoring him. "yes, you do." he responded back with a flick of his tail, keeping his head high despite the fact it was almost hard to stand tall as he was quite hungry and felt like he may fall over. "i can be a great addition, to your....group," he continued.

but he didn't have to convince him any longer, because the tom was saying he could come. great! and then he made some sort of comparison that he didn't understand, but he could tell that the tom was being bitter towards him. he wanted to snap at him and tear him apart, but he knew he had to stay on his good side in order to get accepted into their little posse or whatever it was so he would have shelter and food. the tom seemed like he didn't exactly fancy mushroom though; he would have to change that. "i don't have worms!" he bristled. so much for that. "i have mites actually, but i don't have worms!" did he make the situation worse or better? almost on cue, he was whipping his head around to bite at his shoulder. disgusting.

"they're not a problem, though."[/b][/color] he told coalwhisker with a flick of his ear - his good ear, not his half-torn ear. "they won't stop me from.. from saving your..your cult." he stumbled over his words a bit, but the confidence in his voice stayed.