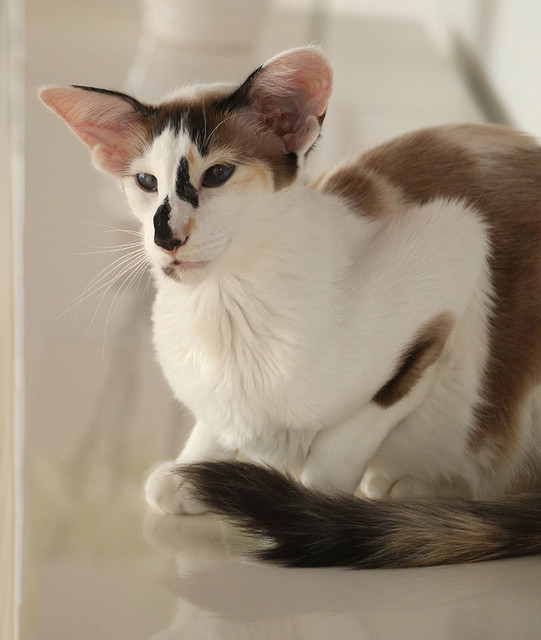 ❁ [BREED]  oriental
❁ [SHORT DESCRIPTION]   a chocolate calico oriental molly with medium-length fur and stone blue eyes
❁ [LONG DESCRIPTION]  lilythorn is a chocolate calico molly with medium-length fur. she takes after her dad and shows mainly oriental traits, specifically the long legs and the large ears. she is taller than most mollies and even some toms since she is mostly oriental. she is mostly white on her face, chest, and underbelly. however, her face has a few dapples of black and cream, and the top of her head is mostly mocha and umber with some very small dots of light brown here and there. her back follows the same pattern as her head does, with a few patches of cream and light brown in between the large patch of mocha brown that runs down her spine and dipping into her hind thighs. she has a single patch of umber on her front left leg. towards the back of her body, it is mostly brown rather than white, and her tail spirals into different shades of brown with umber at the tail tip. she has steel blue-gray eyes.
❁ [AESTHETIC]  earthy colors and earthy things like rocks, bugs, water, etc

❁ [EXTERIOR TRAITS]  sarcastic, calm, witty, tomboy, laid back, won't take shit
❁ [INTERIOR TRAITS]  confused, not good at showing feelings, opinionated, kind, awkward
❁ [LONG DESCRIPTION] lilythorn is a molly who would rather sit back and watch the action happen instead of getting involved. she loves getting others riled up with her small comments, but the thing that really tends to confuse others is how calm and laid back she is while she is taunting others. she is a big tease, always poking fun when she can, but as mentioned before, she would rather watch than participate. she is a super chill molly and rarely finds herself getting involved in drama or anything of the sort, but she will never turn down an opportunity to listen to the gossip; she just doesn't feel the need to spread it. she is very sharp tongued and witty, her sarcasm always popping up in conversation to make jokes. she is great at having immediate comebacks and improvising. she often prefers hanging out with toms because they are more her speed; she likes playing their rough games and roasting sessions, since she is bigger for a molly due to her breed. she definitely won't let anyone talk shit on her or her family, though - only she is allowed to do that - and isn't afraid to step in to set things right when someone is pushing buttons. despite this, she is overall very casual and enjoys doing her own thing.
as most cats do though, she has her flaws; she is often confused about her life and where its headed. yes, she knows she is loved by her family, but she feels like she is letting them down and not as ambitious as the others. she can't find the motivation to do great things and possibly lead like her mother, but instead is a follower more than a boss. moving past that, she is also bad at showing feelings. whether it be love, sadness, anger, happiness - she just doesn't quite know how to portray them correctly. she is often very awkward when it comes to showing her feelings and sometimes it gives off the vibe that she is ungrateful or unhappy even if she is very excited.
❁ [MORAL ALIGNMENT]  lawful evil 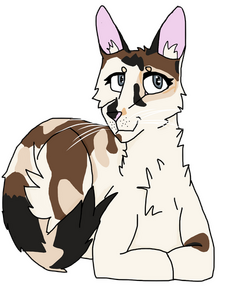 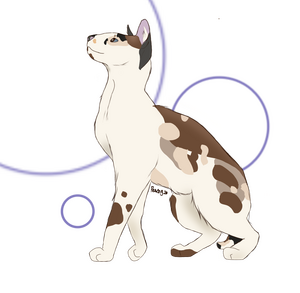 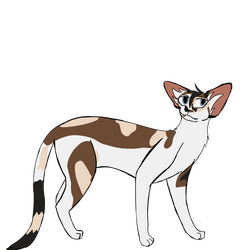 Re: you may be good looking / lilythorn's tags / but you're not a piece of art