Whistle while you work {Open Training!} 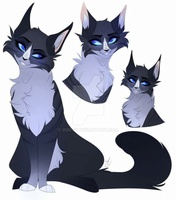 Whistle while you work {Open Training!}

Driftingskies was practically tingling with excitement. Darkstar had given her another apprentice at this moons meeting, and the warrior had been up all night thinking of training schedules and daily chores she could entrust to Blisspaw. Not even her mother's disapproving scowl could ruin this happiness for her. When the dawn light bathed Shadowclan in a warm reddish hue, Driftingskies was the first warrior up and trotting towards the apprentice den. She had instructed Bliss to meet her first thing at dawn so they could start the day with a tour of the territory.

Re: Whistle while you work {Open Training!}

• Blisspaw ~ Female ~ Apprentice •
—— Small with brown, cream, and white point coloring and ice blue eyes.
To be quite honest Blisspaw had been awake well before the sun had even risen. She was bubbling with excitement and eagerness from the moment her name had been changed from Blisskit to Blisspaw and the feeling had only grown as she drew closer to her first day of apprentice training. The small point colored she-cat had barely slept but no one would have guessed that by how still she had been despite being awake. As she heard the first of the clan beginning to rise Bliss silently crept out of the apprentice den and sat off to the side, silent and alert as she waited for Driftingskies to appear. It is likely that no one would be able to guess how excited the young cat was due to her relatively straight face and posture that was so unlike many other apprentices on the first day of training. Bliss wasn't one for showing her true emotions and feelings and ever since she was only a few days old she had been a quiet and rather expressionless kit who schooled her features because she believed she would be taken more seriously if she didn't seem as expressive as the other kits. Sitting with her paws neatly tucked under her tail which was wrapped around in front of her, Bliss studied the clan and those who were awake, watching their every movement without making a sound.
Current date/time is Fri Apr 16, 2021 6:24 am