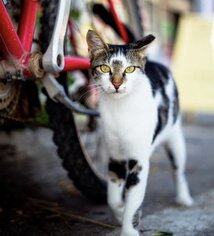 ― ramstrike usually was leaving camp as soon as he could for the day just to be out in the forest, doing his own thing, usually thinking of ways he could continue to show how worthy he was of being the leader. he didn't see dogstar fit, and the tom hadn't even chose a deputy yet; all he would have to do was appoint ramstrike the position, and ramstrike would kill him. it would be that easy, and then ramstrike would be the leader. he could think of a hundred ways to make riverclan better. first things first; borders should be gone. every man for themselves.

his tail flicked irritably against the ground as he stared into the stream, watching fish swim by. oh how easy their food chain was; they didn't even have a leader, they all just swam the same way. he lashed his paw into the water, causing the fish to go around his paw. no matter what, they would keep swimming the same way. nothing could change that. maybe the warrior code would never get fixed, it would never be how it should be.

letting out a sigh, the tom pushed himself to his feet, giving a quick stretch before taking a few steps into the chilly water. it was usually a bit warmer at this time of the year, but it wasn't unbearable. it helped open his mind a bit.