all eyes on you (OPEN)

all eyes on you (OPEN)

Well she had failed and failed terribly. Her apprentices were just given to her not long ago, and then Starclan managed to turn around and tell her they made a mistake? But how? Yeah she may have mixed up herbs here and there, or misdiagnosed a few of her clanmates but everyone has their bad days.... right?

Okay maybe not that many but Rainwhisper was still adjusting to being the role model of two young girls! She herself was new to the role so in a way they were all learning! A shiver went down her spine as her mind raced on her walk through the fallen snow, but she wasn't so sure it was because she was cold. The Russian blue felt like she was being followed yet when she looked around there was no one to be found. It's alright Rain, just breathe.... breathe.  Shaking her head, the molly continued on her little trail from the Moonstone. This was possibly the last time she would make this trip after still not receiving a clear answer yet again.

A frustrated growl bubbled in her throat as she kicked the snow away. Her head twitched and her whiskers curled as the white scenery paused. The falling snow froze in time, the birds above were stuck in mid air and there was no breeze.  Not now please... I just want to get back to camp. Rainwhisper continued on but paused as she felt her nose dripping, and looked down to see drops of blood on the ground. Dark blue eyes searched frantically for something to stop the bleeding, but when she went to apply the cobweb... there was no blood. She looked to the snow and the blood was gone. And everything was back to normal? In case it was to come back, she slowly stuck the cobweb on her nose anyway before shaking her head. Things had been rather strange but she just assumed it was the stress of leaving Darkstar without a Medicine Cat, and her apprentices without a mentor.

The whispering of cats echoed in her ears all the time, with many of them wondering what was going on. It was simple, Rainwhisper was sick but she didn't know what it was. Her parents said it was nothing but you could clearly see the concern on their faces as they watch her everyday. But they weren't her real parents so she didn't inherent anything from them that they could trace back to. Nor did she know her birth parents. They did abandon her after all. Taking a deep breath, she realized she was back in Shadowclan's camp and there were some faces already looking at her. Keeping her maw shut, the Russian blue pawed at the nearly empty and sad fresh kill pile before just sitting down. As much as she loved leaf-bare, Rain didn't enjoy the lack of prey just like the rest of her clanmates.
kiwi 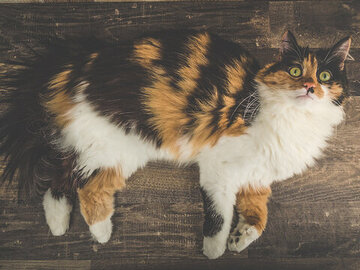 ― "rainwhisper?" daisypaw padded up to the russian blue who was staring at the freshkill pile, something clearly on her mind, clearly not happy about something. she didn't know what it was, though. yes, she knew the molly pretty well, but she didn't know what went on inside her head or what battles she may be fighting herself. "is everything alright? do you need anything?" she felt awkward asking the former medicine cat if she wanted any medicine. she was used to rainwhisper just taking it herself; but she wasn't allowed to do that now. she had lost her position, in a very blunt way that probably still stung.

regardless, it was her job to make sure she was okay. as a friend and a medicine cat. she hoped that the molly wouldn't be offended by her question. she honestly still didn't entirely know what she would give her, if she said yes. rainwhisper had her position revoked at a pretty bad time. she didn't want to assume that the molly wasn't feeling good, but...she was acting weird. crazy. she had to not be feeling good, right? "maybe if you eat you'll feel better.." unfortunately there wasn't much left on the pile, but there was enough for her to fill her belly.
rainwhisper

sorry it took me so long to reply, I honestly thought I did!}}}

The ocean eyed woman looked to the young girl with a smile. "Daisypaw, it's so good to see you. How is the herb stock? Have you and Icepaw been doing well?" A paw scooped up a small shrew out of the pile and tore it open with ease. "I'm doing fine. Just was a little bored that's all, have you come to grab something to eat too?"
Sponsored content