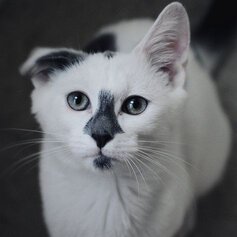 ― firefly was always bored, and this was no exception. he had stared at a beetle crawling on the ground for a bit, pounced on it a few times before getting scolded for acting like a kit by some fellow tribe members; he followed whoever he could around until they told him to knock it off; he made some piles of snow until his paws got too cold to move; he was just trying anything he could do to keep himself busy!

he was now out in a clearing among their territory, and he was practicing jumping off trees as if it was an opponent he was facing. he was just working on his skills, but he had been doing it for about two minutes now so he was quite bored; it was a tree after all, it didn't do anything. it just stayed in one spot. he wanted someone to actually train with, someone he could tussle with or practice with.

maybe he would be lucky and someone would come cure his boredom.

Mentions:
The she cat had come out here with her brother Streak so that she might hunt a bit her brother being slightly pouty as he had wanted to visit their youngest siblings in the nursery before he had to go out but Ash had interrupted him mid stride to go out with her. Though he agreed it was begrudgenly as it was not what he had planned for himself. While keeping an eye to the ground for movement of smaller prey she knew Streak was keeping an eye to the sky for birds of prey. One of the main reasons as to why they did not come out here alone, as she padded forth she took a breath in and was surprised to smell another out here curious as to who it was she followed a small path to one of the larger plateaus where she watched Firefly for a moment before clearing her throat a bit "Well hello Firefly, what has you out here alone?" she questions
"Speech" -Attack-
_________________

― firefly's ears perked immediately - well, to the best of their ability - when he heard another voice speaking out to him. the tom swiveled his head to see none other than ash standing there, having been the one who had referred to him. "oh! ash! hello!" the spunky tom purred, sending her a grin as he took a few steps to get closer to her so he wasn't quite yelling across the clearing to talk with her. "i'm..well, thanks for asking! i'm out here, um.." how was he supposed to say he was boredly fighting trees and leaves and other random things he could find? that would make him sound like a kit. yes, he was still a kit at heart but he hated making himself look so dumb infront of the she-cats!

"i..." he trailed off, unable to come up with anything on the spot before he blew out a large breath. "i was fighting trees. i'm bored, ash, i am really bored! i was going to hunt but i couldn't find anything so i wanted to practice fighting but i have nobody out here to practice fighting with so i am dueling a tree and man am i bored."