surely tomorrow and the days after || gathering patrols

surely tomorrow and the days after || gathering patrols

COALSTAR
thunderclan leader | solid black | oriental short-hair | tags
Even during Sunhigh the bitter cold is inescapable. The days have grown longer since the height of Leafbare, yet the warmth still hasn’t returned. Around Coalstar, his clanmates huddle in patches of sunlight, sharing in their body heat and gathering as much of the scant warmth as they can on their pelts before the sun begins to dip towards the horizon and they are all collectively forced to face the biting air once more.

With seemingly everyone present, Coalstar lights on top of the Highrock and looks over ThunderClan’s camp. There are things expected of him, this Coalstar knows. Words he is supposed to speak to gather the clan together. Such traditions feel ill-fitting and tight, something Coalstar could suffocate in.

Instead, he clears his throat thrice, each time louder than the last, and barks out, “HEY!” loud enough that eyes and ears alike snap to Coalstar in attention.

The silence that follows feels terribly awkward. Coalstar finds that, even in knowing what to say, he hasn’t any idea on how to say it.

“Everyone,” He begins, and it feels needless. Coalstar is unpracticed in speaking to others in general, let alone this many at once. He takes a breath, holds it, and shuts his eyes against the world, “We need to- I need to… alert the other clans of our recent change in leadership, and I am in need of those willing to travel with me to… do that.” 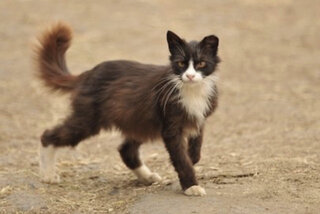 ― mushroom hadn't been in the clan for too long, he had only been around for a bit of solarstar's reign, but he is pretty sure either way that the leader isn't just supposed to yell "hey" to get everyone's attention. but then again, he is new to the clan and just a kit; what does he know about the rules? he flicked an ear, the stench-ridden, flea-bitten kit jumping to his paws to pad over to see what all the ruckus was about. he saw other cats moving past him, some moving closer to the rock than others.

coalstar continued speaking to say he needed a patrol to go to the other clans. mushroom always forgot there were other clans. nonetheless, he would still go. "i'll come," he cawed immediately, not even waiting a second or two. after all, he was the bravest in the clan! "you'll need me, i know it." he still disagreed with the rule that young cats couldn't leave camp.

COALSTAR
thunderclan leader | solid black | oriental short-hair | tags
Of course the first to approach is Mushroom. Coalstar is foolish if he even considered any other possibility. Instinct and common sense both tell him to deny the kit, but Coalstar feels as though he knows him well enough to understand that Mushroom will come along no matter what. “Fine,” Coalstar concedes. Better to not make him feel as though he needs to be stealthy, where he is bound to get hurt or lost. No, it is better to keep him somewhere an eye can be kept on him. “But if you whine about being tired or any of that, I wont be hearing it.”
_________________
character storage
kiwi

― even though mushroom had been so full of himself, he really had not expected coalstar to say that he could come. his ears immediately perked, a small smile coming onto his face with excitement. he had already been outside the camp anyways when he first arrived, so he felt like he would do a good job at this "patrolling" ordeal. "you're the best leader!" he chirped, unable to hide his excitement, and then quickly realized his mistake. "good, you made a good decision," he quickly turned it around to act like he was not excited, and was merely doing this on behalf of the clan and coalstar. his patchy tail stuck straight in the air as he waited to see who else may come along.

"i won't get tired," he mocked coalstar's words, giving a swift roll of his eyes to go along with his sentence. "are you kidding? i'm like - the toughest one in the clan, for sure." he puffed out his chest, his eyes falling on a beetle crawling a few tail lengths in front of him. he wanted so badly to pounce on it, play with it - but he couldn't. he knew he had to portray himself as big and bad, so coalstar knew he would be good. "i'll catch the biggest bird you've seen, yet," he promised him, even though to be frank, it would be a bird that would be catching him if they came across one.