Pinepaw stood on the edge of WindClan's territory, the frigid gust whipping through his thin pelt and the thick snow brushing his underbelly. His paws felt almost frozen solid, but the chimera didn't pay it any mind; this was the only time he'd be able to do this without any of his clanmates breathing down his neck. Condensation temporarily blocked his vision as he exhaled, not unlike the wispy clouds that blocked Silverpelt for long moments, occasionally shifting out of the way to reveal the sparkling stars. He didn't dare cross the border, not when the snow would leave such a visible trail, but his soul felt a persistent tugging to see the world beyond their scent markers. Pinepaw had never left WindClan's territory aside from occasional gatherings, and the unknowns past the ends of the moors intrigued him like nothing else.

Sure, he loved his clanmates and recited the loyal words of a dedicated warrior, but part of him wondered if he wasn't meant to be here. The cinnamon-and-white tom knew for certain he didn't mean it in the same way as his peers, and as much as he wanted to, he just couldn't.

Maybe he'd be better off in another clan.

Though, some part of him knew that wouldn't be the answer he sought, all of the problems he saw in his own clan he knew he'd find in others. He knew from asking other apprentices at gatherings that they too felt just like his peers about their own clans, and Pinepaw didn't have to ask the warriors how they felt.

Pinepaw blinked, coming to with one paw raised and the trail of pawsteps behind him just a few strides longer, right at the edge of the scent markers. He put his foot back down, tucking his chin into his chest and lowering his tail until it rested on the snow behind him. He turned, knowing he needed to get back to camp and into his nest before anybody realized he was missing. The apprentice needed to get his head on straight before he did something regretful. 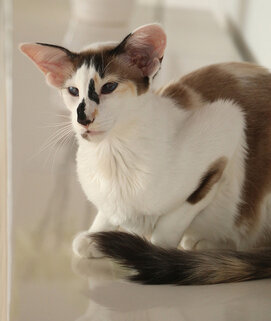 ― "pinepaw?" lilythorn recognized the scent of the younger tom as she approached, having been out hunting. she had buried a rabbit earlier, and she swore she heard a mouse rustling around in the leaves but now she was pretty sure it was just pinepaw she had heard. "what is it that delivers yourself so distant from our camp?" she flicked an ear, the monotone molly genuinely curious but her tone giving off everything but that. her monotonicity, it really cursed her sometimes. she was always interested, even if her voice made it seem like she was not. "is business favorable with you? you look a bit..befuddled, maybe even vexed," she continued. the tall molly was exceptionally good at pointing out things that probably didn't need to be pointed out, either.

she was only a few moons older than the tom; she was a recently made warrior, and she had her fair share of coming too close to the border time after time just to see what would happen. nothing ever did. but that's the thrill of it, right? never knowing when something would happen versus when it wouldn't.

The stocky tom nearly jumped out of his pelt when the taller she-cat stepped out in front of him, his sleek fur fluffing out. "Stars," he cursed breathlessly, "you scared me!"

Pinepaw opened his mouth to ask her what she was doing out so late but paused at her question, the tension that had built in his shoulders melting away as he turned his head to forlornly gaze at the border; not that he could see it this far away in the dim light of the moon. "I. . . " Hesitantly, with a cloud of breath fogging up his vision as the chimera turned back to look at the tortoiseshell. "I was just thinking. It's such a big world, y'know? And we're here, stuck on the moor." Pinepaw's piercing stare returned to Lilythorn, looking rather lost and very much like a freshly appointed 'paw rather than a cat on the verge of his warrior ceremony.

The question was right on the tip of his tongue, all he had to do was work up the courage to ask it. . .

"Don't you ever want to leave?" The cinnamon-and-white tom asked, whispering as if the words were so blasphemous that StarClan would smite him if he spoke them too loudly. It wasn't even a matter of what if; Pinepaw knew the code, he knew that he was expected to lay down his life for WindClan if it was necessary, and here he was, talking about leaving.

― lilythorn let out a short laugh whenever she noticed pinepaw puffing up to say that he had been frightened by the female who had came out of the bushes to interrogate him. he definitely seemed to have something on his mind if he was that consumed in his own thoughts that he didn't hear the molly approaching, that was for sure. he seemed to be going through some sort of mind game, pointing out the world was so big and they were stuck to the moor. she wanted to point out to him that they truly were not necessarily stuck here, but she waited to see what else the tom had to say out loud, just let him think a bit.

and then he finally asked the million dollar question: did she ever want to leave? he seemed nervous asking it, like it could be a sin. lilythorn was never one to judge though, no matter how judgmental her monotone voice always came off as."pinepaw, i postulate everyone has had that enquire previously. everyone has challenged where they are genuinely indicated to be." she waited for a few moments before deciding to be brashly honest: "legitimacy be told, i used to weasel into the kittypet colony when i was a young apprentice because i derived perhaps that may be a superior life for I. i would dine on their cuisine, befriend the twolegs. revisiting the past - it undeniably informed me of something; but as we all do, i learned that is not where i chime; my heart resides with windclan."

"it is unconditionally permitted to question these things. we all do." the young molly flicked a whisker as she looked out into the lands that he was also looking towards.