tremble for yourself - INTRO 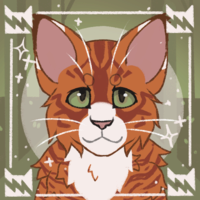 tremble for yourself - INTRO

Flamepaw
As the sun started to rise, so would an anxious apprentice. This was her first day as a real Thunderclan apprentice. The idea of potentially finding predators out in the forest, or fighting another clan cat was...well, absolutely terrifying. She could hear her denmates starting to stir, so she would quickly hurry out of the den, hoping to avoid a conversation. The other apprentices were much more outgoing than her, and the last thing she wanted to do was get caught in the middle of their dreams and aspirations of fighting every living creature outside the camp's walls. All she wanted to do was hunt, and survive.
I suppose I should find Fallowsoul.. she thought nervously. What did her new mentor have planned for her today? Hopefully nothing hard...Flamepaw looked down at her paws, imagining them stained with blood. Her stomach twisted into a horrible knot, and she found herself feeling sick..Some warrior I will be! she cursed herself silently.
_________________

WEEP LITTLE LION MAN,
YOU'RE NOT AS BRAVE AS YOU WERE AT THE START
Flamepaw - Thunderclan - Apprentice - 6 moons - Mentored by Fallowsoul
.nico.

Solarflare knew that young Flamepaw had been assigned as Fallowsoul's apprentice and he was thankful that such a wonderful warrior was going to mold this young mind. The large tom padded over towards the flame-hued molly and offered a comforting smile. She seemed anxious and Solarflare could tell. Most apprentices were when the first started. He remembered being her age and being afraid of the world around him for some time. It was as if the world could break and fall apart around them if they messed up once. "Hey, Flamepaw. Excited for training with Fallowsoul?"
_________________
Welcome to Astralis Frontier! Please reach out to me if you have any concerns either here or on Discord
scar.

he remembered his first day out of camp, too. it wasn't that many moons ago. two, maybe three at most. but a moon after rhe and his siblings had been allowed out to explore the wonders of the territory.... he didn't wanna think about it. he had been naive to think it was safe out there, and it left him scared and bitter. he wanted to be happy for flamepaw. he wanted to tell the slightly younger apprentice that it was fun, and that she would feel free once she stepped out but he couldn't. he didn't believe that. he hadn't even left camp since the incident, so what in the name of the stars did he know? twitching his ear, the sphynx grabbed a small frog from the freshkill pile, dropping it at the apprentice's paws, flicking his ear in greeting to solarflare. "you might want to eat." his voice sounded cold and distant but given the circumstances... that was the best he could do. at least he was being nice and not straight up ignoring her... right?
Sponsored content