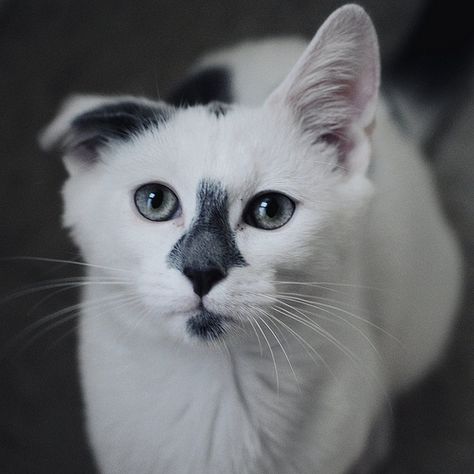 ✧[BREED] a mix of a few different breeds
✧[SHORT DESCRIPTION] a sleek white tom with a few patches of gray, one floppy ear and stone blue eyes
✧[LONG DESCRIPTION] firefly is a small, sleek primarily white tom. he has soft, dense fur and is on the smaller side for a tom his age, greatly portraying the fact that he was a runt and smaller than usual when he was born.  he has some small cinder gray patches all around his body like on his nose, chin, forehead, back and paws. his tail is completely gray. he has one ear that is flopped over and does not stand straight, but sits like a scottish fold's ear. he has one stone blue eye and one green eye, always filled with cheer.
✧[AESTHETIC] night, bonfires, autumn, warmth
PERSONALITY.
✧[INTERIOR TRAITS] excited, cheerful, flamboyant, welcoming
✧[EXTERIOR TRAITS] dumb, confused, annoying
✧[LONG DESCRIPTION] firefly is a very rambunctious and chaotic tom. he loves making friends and will welcome anyone he sees into his open arms, taking anyone and everyone under his wing. he can best be described as a rascal; he is always getting into some sort of trouble, but always seems to find his way out of it with his charming personality and his great way with words. he's very people-smart, but not very book-smart or even common sense smart. he is loud and outgoing, but he is just a dumb lil guy. despite this, he doesn't let it bring him down and is still always as happy as can be! sometimes he is so flamboyant and cheerful that he can really get on the nerves of his fellow tribe members without even realizing it. he often needs to be reminded to take it a notch down and chill out a bit because he is always so full of energy! he will talk to anyone who will listen to him, and he will ramble on and on. sometimes it seems like he talks just to fill the silence and to hear his own voice!
✧[MORAL ALIGNMENT] chaotic good
RELATIONS.
✧[PARENTS] apple that falls from tree x  viola
✧[SIBLINGS] none
✧[OTHER RELATIVES] open
✧[STATUS] single
✧[CRUSH] flicker of raging fire (flicker)
✧[MATE] none
✧[KITS] none
✧[FRIENDS] flicker, aspenpaw
✧[ENEMIES] open
OTHER INFO.
✧[SCENT] pine needles
✧[HISTORY] born to a cave guard and a loner, his father died soon after he was born and his mother had never made an appearance so the tom grew up without parents and instead was fostered by the different kit mothers.
✧[VOICE CLAIM] chris wood
✧[THEME SONG] devil's whisper - raury
FIREFLY!

⋆ AND IF ITS CRAZY, LIVE A LITTLE CRAZY! ⋆