could you be loved | p; basilisk

could you be loved | p; basilisk

The marred blue tri-color tabby padded towards the Medicine Cat den. Their stormy blue eye locked onto the opening, hoping to see the chocolate point feline that was now residing in that den. The smell of herbs grew stronger as they moved closer to their destination. Dogstar wasn't even sure what they were doing here, approaching someone she found...well...less than satisfactory. Yet feelings were present and the leader knew this to be true. It was harsh and it broke them into a million pieces. Their stomach was churning as they approached the home of one she considered to be her frienemy. "Basiliskhiss." Dogstar all but barked towards the medicine cat.

Finding him in the corner, sorting through some herbs, the leader approached. "I need to you help me with interpreting a dream I've had. I don't know if it is from StarClan or if it is just my mind playing tricks on me." The dream had been vivid. Blood was running over their prey, torn into pieces brutishly. Then a pile of sand morphs into a cat and smiles villainously at them before they breaks the sandy cat's neck. Dogstar was afraid of what it meant. What it meant for RiverClan.
_________________
Welcome to Astralis Frontier! Please reach out to me if you have any concerns either here or on Discord
Basiliskhiss 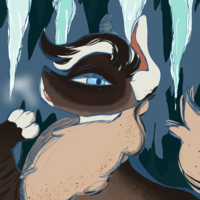 Re: could you be loved | p; basilisk

The gruff chime of his new leader immediately made his fur rise ever so slightly. He does his best to focus on his herbs, hoping greeting them with silence will encourage them to leave. No luck. He's about to throw back his head dramatically and sigh all-suffering, but he holds back when he hears them speak. "hOHO You need MY help?" smirks the handsome tom, flipping the tuft of fur on his head with utmost satisfaction, "well then since you insist, my dear, he purrs as he turns around, but what he sees on their face isn't begrudging need for assistance...but sincerity. Sincerity is not something he's used to seeing in them. Bass flicks his thick tail, the smug smile falling away. Coughing uncomfortably into his paw, he amends reluctantly, "Ah..well, I suppose I have time on my hands" He puts away the last of the herbs and breaks more of the distance between them to sit before the feline. They'd never been...close by any means, but he wouldn't call them someone he hated or wanted to see suffer. For all their squabbling, they made for a pretty good team at the end of the day, and there was no one Basiliskhiss saw as a better leader than them. Than him really. Still, though he has never-to-be-admitted respect for the enby before him, that didn't mean he wouldn't keep them on their toes with his typical cattiness. "Probably both - I bet the message is treating your medicine cat better, starclan and your subconscious would agree" he mews, rasping a tongue over his perfect chest.
_________________
• * ₊ ° 。BASILISKHISS / Life's just one baited snare
welcome to horrible fictional reality ━━ ✩
Current date/time is Thu May 06, 2021 6:13 am