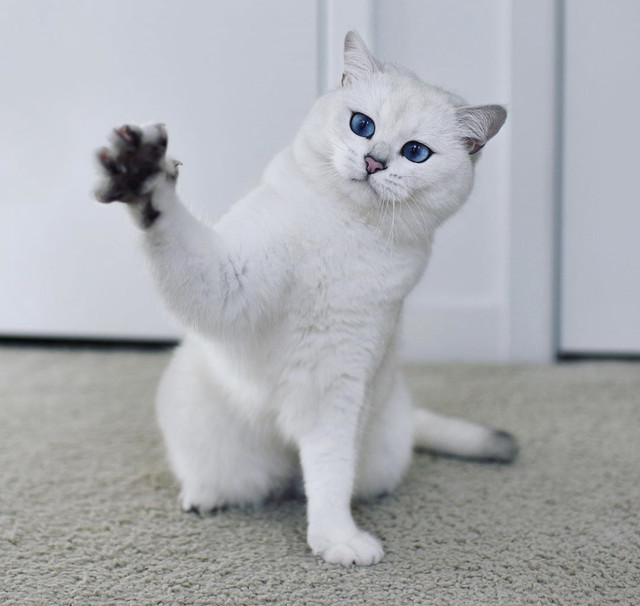 ♕[BREED] british shorthair x munchkin cross
♕[SHORT DESCRIPTION] a short, deaf, soft white molly with some gray patches and sapphire eyes
♕[LONG DESCRIPTION] vanillatuft is a short-furred yet soft white molly with a few patches of light, pewter gray on her body, like on her tail and her ears. her soft fur and appearance comes from her father which was a british shorthair cat, however, her father is unknown to her. she has the most stunning blue sapphire eyes which help add some vibrant color to her fur. she is on the short side as her mother was partially munchkin, so she has semi-short legs that make her sit a bit lower than the majority of her clanmates and give off the impression she looks more like an apprentice than a warrior and causing a small waddle in her walk.
♕[AESTHETIC] purples, sunsets, flowers

♕[INTERIOR TRAITS] outgoing, energetic, happy, spastic, optimistic, sassy, bossy
♕[EXTERIOR TRAITS] feels left out, not good enough, sad, clingy
♕[LONG DESCRIPTION] vanillatuft is deaf, so she speaks little to never however, despite this, she is one of the happiest cats ever. her tail is always in the air, always a smile on her face - she greets everyone with some sort of body motion. she watches with large, curious eyes and always tries to help, even if her help isn't welcome. she loves to put her paws where they dont belong if she thinks she can fix a situation. she is oddly optimistic despite her circumstances, trying to be a idol for those around her to show that you don't have to be perfect in order to live a happy and fulfilling life. she really adores making friends, but it comes at the cost that you need to learn all of her cat sign languages and body motions. she uses vibrations of the ground and body signals to communicate often, but here and there she can say short sentences. she lost her hearing around 3 moons of age so she learned most words before she lost her hearing, leaving her able to lipread well. she tends to only actually speak with her closest friends; mercy, batstar, owlgaze and jaegar. this is because she knows they are patient and can understand her short sentences. however, most others, she just nods or twitches or does another signal to communicate. even though she portrays herself as happy as can be, vanillatuft feels as though she is not good enough and lets those around her down. she is sad that she can't experience life the same way others can, by hearing sounds and talking properly. she often feels left out because everyone is laughing and having a good time, and she is trying to figure out what the joke was because she had missed it due to someone blocking her view.
♕[MORAL ALIGNMENT] lawful neutral

♕[SCENT] mint
♕[HISTORY] vanillatuft was born a normal kit, but when she was around 3 moons her mother noticed she began losing hearing. her mom did a great job of hiding it, pretending vanillatuft just hated socializing and ignored everyone, right up until a few days before her apprentice ceremony and the leader wished to speak to vanillatuft and her mother threw a fit and eventually the secret came out. they came to an agreement that sending vanillatuft into warrior training was basically a death sentence, and so she became a medicine cat apprentice instead. since she wasn't initially born deaf, she learned to lipread pretty well, but still has trouble here and there as most would. she has made up some body signals in order to communicate with the other MC's.
♕[VOICE CLAIM] alexis bledel (rory gilmore)
♕[THEME SONG] strawberry blonde - mitski/

Re: IF YOU NEED A LIL SUNSHINE | vanillatuft's tags | YOU CAN BORROW SOME OF MINE